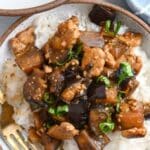 Eggplant is the star of the show in this sweet and savory flavor-packed stir fry. If you're intimidated by cooking eggplant, this dish is a great place to start!

As much as I love eating eggplant dishes, I've always been intimidated by cooking it. There's always breaded eggplant and roasted eggplant, but something about cooking eggplant on the stove always leaves me disappointed.

Until I tried this eggplant stir fry recipe at my friend's house a few months ago. It inspired me to make my own eggplant stir fry using the method from that recipe (though honestly I ended up changing a lot of the original method!).

How to cook eggplant

Dice the eggplant into 1-2 inch cubes. They should be roughly the same size but it doesn't need to be exact.

The more surface area the pot used has, the more quickly the eggplant will cook. I actually prefer cooking it in a large skillet as opposed to the Dutch oven (large pot) I used for this video.

Eggplant is like a sponge and it loves soaking up oil and liquid. Because of this, I cook it in 3 tablespoons of oil.

Cook the eggplant, sliced tempeh, and red onion over medium-high heat until the eggplan is golden. This will take 4-6 minutes but timing may vary depending on the size of your pan (larger will be quicker).

Once it's browned, add in ½ cup vegetable broth. Continue cooking over medium-high heat until the eggplant is very soft. Don't stop cooking the eggplant until it is soft enough to eat.

Remove everything from the pan in order to make the sauce. You do not need to clean the pan before using it for this step.

Heat another drizzle of oil over medium-high heat. Add the minced ginger and garlic. Saute until aromatic and golden, about 1-2 minutes.

Deglaze the pot with the rice vinegar, stirring to remove any stuck-on pieces or browned spots. Add the remaining sauce ingredients, stirring to combine.

Return the eggplant etc. to the pot. Stir to coat in the sauce. Continue cooking until the sauce is thickened, about 4-5 minutes.

While I use globe eggplants in this stir-fry due to their convenience (they are the most common eggplant in most grocery stores), you can use most varieties of eggplant.

Chinese eggplant is great for stir-frying, whereas globe eggplants/American eggplant tend to have a "meatier" texture that makes them take longer to cook.

Italian eggplant is a smaller version of globe eggplants and they tend to be sweeter.

Different varieties of eggplant will have different cook times. As a rule of thumb, globe eggplants tend to cook more slowly than smaller varieties like Chinese or Japanese eggplants.

Nutrition calculations are an estimate and do not include rice.