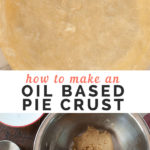 This oil pie crust recipe is an easy low-stress pie dough that requires minimal prep. Use this recipe when you're looking for a vegan pie crust that doesn't use butter! It's delicious with sweet and savory pies. 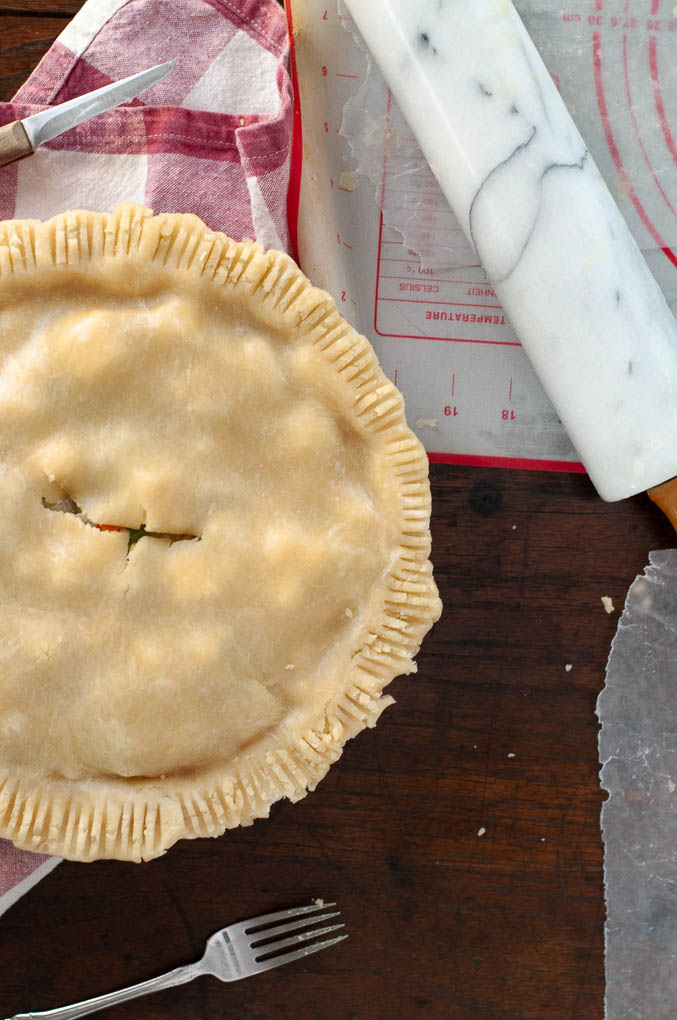 When it comes to comfort food cooking, there's no getting out of knowing how to make a pie crust. I feel like pie is like the most elevated form of a casserole (which is one of my favorite kinds of comfort food): not only do you get a well rounded meal, or dessert, in one slice, but that slice is surrounded by flaky, indulgent pie crust.

Oil pie crusts are easy to work with because, unlike butter, the fat is already melted. This means that it incorporates into the flour more easily than a solid fat does. The end result is still a flaky, delicious, and satisfyingly rich crust.

Here's how to make a perfect oil pie crust that's flaky, easy to make, and just plain hard to get wrong! 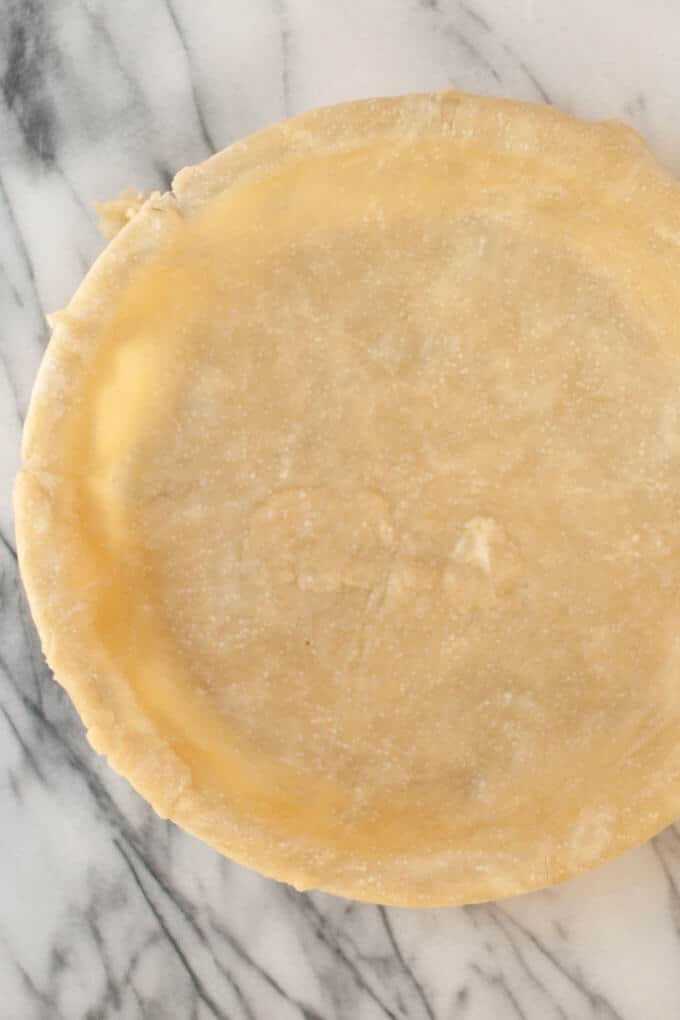 The Components of an Oil Pie Crust

Most oils that are liquid at room temperature work well in this pie crust recipe. Oils with a neutral flavor, like canola or vegetable oil, work best in pie crust.

Olive oil works in pie crust, but it may impart a slightly olive oil flavor to final product. Be sure that you're not heating the crust to over 375 degrees Fahrenheit, as this is the smoke point of many olive oils.

The takeaway: for a basic pie crust choose an oil that has a neutral flavor.

Low protein flours work best for pies because they yield a more tender crust. The higher the protein content of the flour, the tougher the dough.

The takeaway: All-purpose flour is usually your best bet for a standard oil pie crust for beginners.

The primary role of salt is to contribute flavor to the crust. While it does contribute a bit to gluten formation, it's most noticeable effect is in taste.

The takeaway: Salt enhances the flavor of pie crust; use as little or as much as you prefer.

Ice cold water is used in pie crust because cold water makes the pastry dough easier to work with. Add the ice water one tablespoon at a time, as the amount of liquid needed will vary based on kitchen conditions like humidity and temperature.

For actually ice cold water, add a few ice cubes to a bowl (or glass) or water and scoop water out from the dish a tablespoon at a time as you add it to the dry ingredients.

One of those recipes was my grandma's "Pat in Pat Oil Pie Crust" (because you would pat the pie crust into place in the pie dish). This recipe is a little different, but is based on the same secret ingredient:

Simply place your pie dough between two pieces of wax paper before rolling it out. This is the wax paper that I use.

No extra flour means no extra gluten formation, which means tender, flaky pie crust. No direct contact with the rolling pin means no pie dough sticking to the rolling pin! Be amazed as your pie crust comes off of the wax paper easily as can be.

Okay, that's enough about oil-based pie crust for now. Check out my tried and true recipe below! It works well for sweet and savory recipes alike.

The steps to making an oil based pie crust 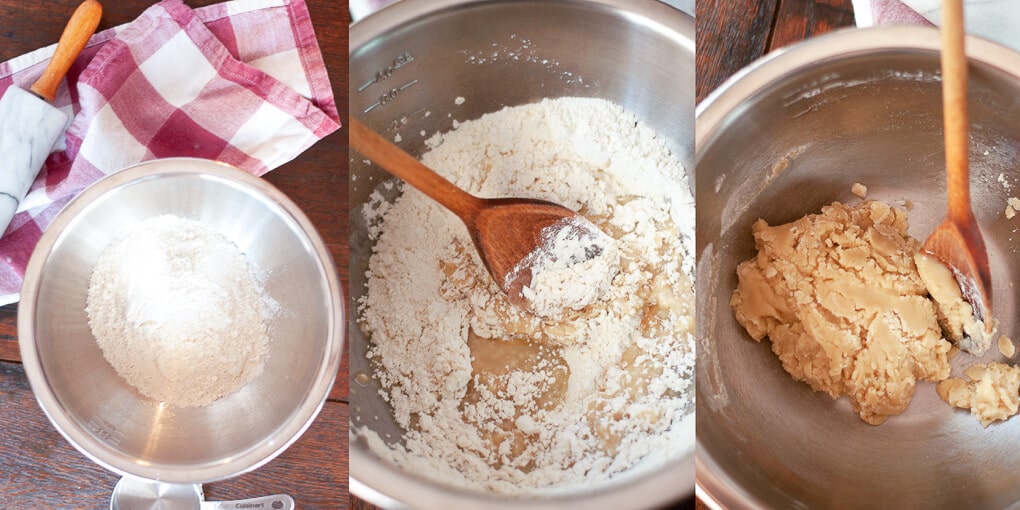 Mix together with a wooden spoon until a rough ball forms; add additional 1 tablespoon of ice cold water if it is too crumbly.

Divide into two evenly sized dough balls. Cover and let rest in the fridge for at least 15 minutes. Place each dough ball between a large sheet of wax paper (at least 12 in x 12 in).

Roll out with a rolling pin until the dough is 12x12 inches. I prefer to use a marble rolling pin like this one. 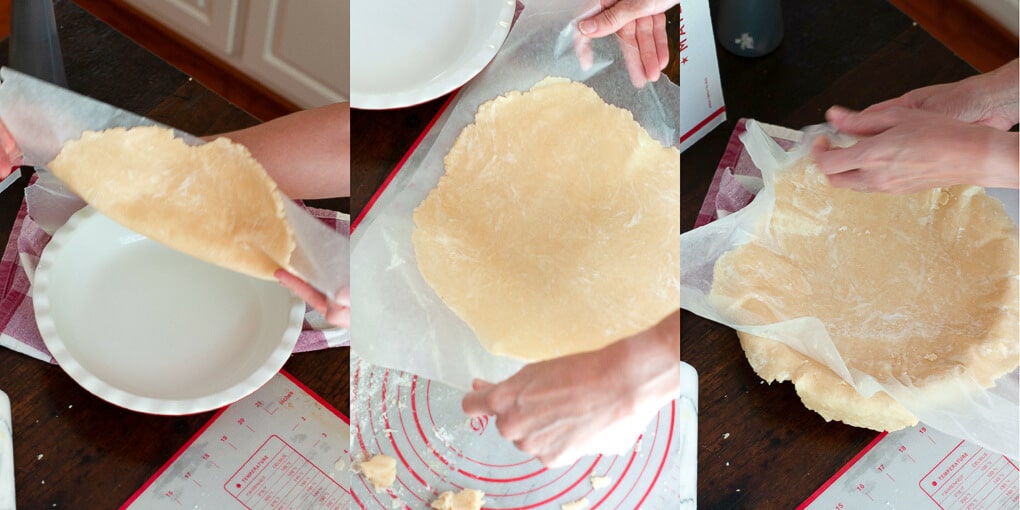 Invert the wax paper and center the pie dough on a pie dish. Carefully peel the wax paper off of the dough (as seen above). Cook according to your recipe instructions.

One of my favorite ways to use this crust is in my Vegan Pot Pie with Tofu and Veggies. It also makes a great vegan pumpkin pie crust! 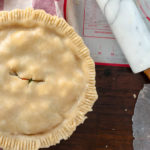 How to Make a Perfect Oil Pie Crust