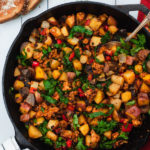 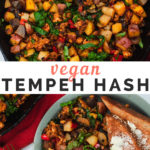 This one-skillet vegan tempeh hash is the perfect dish for brunches or meal prep. It's filling, healthy, and easy to make!

Next time you’re wondering what to make for breakfast, why not try out a tempeh hash? A cozy breakfast potato hash is perfect for any time of year.

During summertime, it's a great way to make a one-dish meal without using the oven, and during the winter it's the perfect warming breakfast.

If you're new to vegan or vegetarian cooking, this is a very easy breakfast recipe to start with!

This tempeh hash makes a balanced vegan breakfast. Tempeh is the main protein source and potatoes provide a hearty helping of carbohydrates.

Add red bell pepper and onion for sweetness and kale for a healthy helping of greens.

Pro tip: Sprinkle with nutritional yeast just before serving for an extra burst of flavor – and a dose of Vitamin B12, which is important for nerve health and only naturally occurs in animal products.

How to make vegan tempeh hash

To make a vegan hash, there are just four simple steps:

2. Chop up vegetables and potatoes

4. Cook in a large skillet until the potatoes are crisp

Crispy potatoes are definitely the best part of a hash!

Do I have to use a cast iron skillet?

Any non-stick skillet will work for a stove-top hash. Cast iron skillets are useful if you want to transfer the hash to the oven.

In this recipe you can use any 12" non-stick or cast iron skillet.

What kind of potatoes work in a hash?

Starchy potatoes like russets work best in a hash because they become crisp and golden during roasting.

Waxy red or new potatoes (small potatoes) become soft and creamy during cooking, so they don't crisp up as well.

Why do you steam tempeh?

Have you ever noticed that slightly tangy flavor in tempeh? Steaming in a steamer basket removes that astringent flavor that some may not enjoy.

Steaming tempeh before cooking also softens it so that it more easily soak up seasonings.

This is a key step in my other tempeh recipes like tempeh bacon and tempeh taco meat.

As an Amazon Associate and member of other affiliate programs, I earn from qualifying purchases.