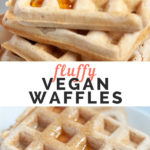 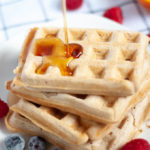 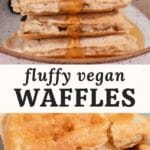 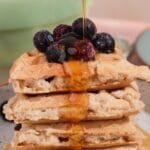 These fluffy vegan waffles are soft on the inside and crisp on the outside. They use simple pantry staples and are ready in just 15 minutes!

If you're looking for another vegan breakfast essential like pancakes and buttermilk biscuits to add to your arsenal, then you'll love these fluffy vegan waffles!

There's nothing better than a big weekend breakfast. Think waffles paired with vegan sausage patties or a tofu scramble, a potato skillet, and maybe a fruit salad. It's hard to beat!

Why this recipe works

These waffles are fluffy and soft on the inside, with the slightest golden crisp on the outside. This is a classic waffle recipe, just without the eggs or dairy.

Vegan waffles are even easier to make than their non-vegan counterpart. All you have to do is mix together the dry ingredients then fold in the liquid ingredients.

For best results, don't overmix the waffle batter! It's okay if some lumps remain. I like to use a spatula and fold the batter instead of stirring or whisking it.

How can I tell when waffles are ready?

A good rule of them to tell that waffles are ready is to watch the steam. When the waffle first starts cooking, a lot of steam will come out. After 3-4 minutes, the steam will subside. Open the waffle maker when the steam has completely stopped.

Can I make this recipe oil-free?

Yes, you can actually omit the oil from the waffles to make them oil-free. They won't be as crisp, but the recipe still works (I tested it).

Can I use a liquid sweetener like maple syrup instead of white sugar?

I haven't tested these waffles with a liquid sweetener so I can't say for sure. My guess is that it would work, but I'll update the recipe if I try it out.

Can I freeze these?

Yes, these waffles freeze really well. Let them cool to room temp before transferring to a freezer-safe container. Freeze for up to 3 months and reheat in the microwave, on the stove-top, or in a toaster.

How many waffles does this recipe make?

This recipe makes two 8" waffles in a standard circular waffle iron (this is similar to the kind that I use). It can easily be doubled, tripled, etc. to make more waffles.

Can I use gluten-free flour? 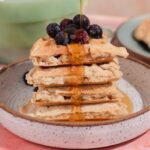 These vegan waffles are fluffy and soft on the inside and crisp and golden on the outside. Pair with fresh fruit or veggie sausage for a filling weekend breakfast.
Prep Time10 mins
Cook Time5 mins
Total Time15 mins
Servings: 2 8" waffles
Author: Cassidy Reeser, MS, RD

Author's note: This recipe was originally shared June 2018. It was updated January 2022 with new photos, a video, and more tips. The oil was decreased by 1 tablespoon but otherwise the recipes remains unchanged.