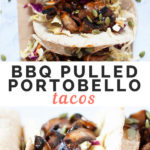 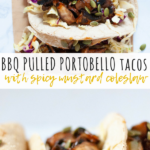 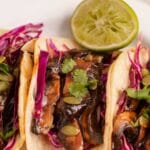 These portobello mushroom tacos are simmered in a sweet BBQ sauce and combined with a spicy mustard slaw for a flavorful meatless meal that's ready in just 20 minutes!

These vegan tacos are similar to my BBQ jackfruit tacos, but instead of jackfruit, we are using "pulled" portobello mushrooms!

Portobello mushrooms are the perfect vegan taco filling. They have a chewy yet tender texture that makes them a great meatless alternative to BBQ pulled pork.

Are you a big fan of mushrooms? Then you'll love my grilled portobello burgers and mushroom Philly cheesesteak.

How to prep portobello mushrooms

Heat a large cast-iron pan or non-stick skillet over medium-high heat. Add enough neutral oil to coat the bottom of the pan. I usually use olive oil.

Add the sliced portobello mushrooms. Cook for 3-4 minutes, stirring as needed to cook mushrooms evenly on each side.

The mushrooms are ready for the BBQ sauce when they are golden and have a wet appearance. They aren't ready if they still appear dry.

Add the barbecue sauce to the pan. If it's a very thick BBQ sauce, I recommend adding 2-3 tablespoons of vegetable broth to the pan as well. This helps disperse the BBQ sauce evenly over every mushroom slice.

Bring the sauce to a simmer. Reduce to medium-low heat. Simmer, uncovered, for 4-5 minutes. Over time the sauce thickens and the mushrooms absorb the BBQ flavor.

The longer the mushrooms cook, the more the BBQ sauce evaporates and concentrates the flavor.

The zesty flavor of mustard balances out the sweetness of barbecue sauce. To make the mustard slaw, all you have to do is whisk together the slaw dressing ingredients in a small bowl.

Toss the dressing with the shredded cabbage. Transfer to the fridge to chill while the mushrooms cook.

Time-saving tip: Buy coleslaw mix at the store to save on prep time. This usually includes carrots and is made with white cabbage.

Can I use a different kind of mushroom?

Yes, you can use baby Bella mushrooms (AKA crimini mushrooms) or white mushrooms. I recommend including the mushroom stalk for extra texture. Slice each mushroom cap into just 2-3 pieces and cook per recipe instructions.

Can I freeze leftover portobello mushrooms?

Although cooked mushrooms can successfully be frozen, I don't recommend freezing them for this recipe. The mushroom texture changes slightly and is softer after thawing.

Is it necessary to remove mushroom gills?

It is technically not necessary to remove mushroom gills before cooking because they are safe to eat. However, they hold onto dirt and grit that can be hard to remove with just a rinse. They also have a dark color that bleeds over to whatever it is cooked with.

Are these tacos gluten-free?

Some BBQ sauces contain gluten, but as long as you choose a gluten-free BBQ sauce these tacos are gluten-free. 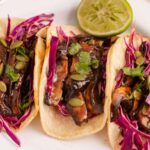 Author's note: This recipe was originally shared April 2018. It was updated in March 2022 with new photos and a video. The recipe remains the same.