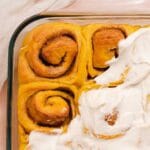 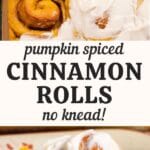 Pumpkin cinnamon rolls are gooey, pumpkin-spiced and the perfect comfort food to eat on chilly fall mornings. This recipe requires no kneading and is made with an ultra-delicious buttercream frosting!

I can't wait any longer to share these pumpkin cinnamon rolls with you. As soon as there's a chill in the air it's time for all things pumpkin, right?

If you're intimidated by making cinnamon rolls, this is a great place to start because these rolls are no-knead and the dough is very forgiving.

These aren't just cinnamon rolls with pumpkin spice. They have pumpkin puree IN the dough and in the cinnamon sugar filling. Are you ready for a big bite of fall?

This is an enriched dough, which means it is made with high-fat ingredients like butter and eggs. Unlike biscuits which are made with just butter or pizza dough which is made without butter, the enriched dough is rich and makes an extra soft bread. Sweet potato rolls and whole wheat garlic knots are also enriched bread.

These are the ingredients needed to make pumpkin cinnamon rolls:

Place in a lightly oiled 9x13 baking dish or two 9" cake pans. Let rest until doubled in size, about 30 minutes.

If you want cake-like frosting I recommend waiting for the cinnamon rolls to cool completely. For a more melted icing, you can just pour the frosting right on.

How do you store these?

I prefer storing them in the fridge because they are enriched dough. I don't find that they dry out, especially if you pop them in the microwave for 10 seconds before eating. They will keep for 4-5 days in the fridge and 2-3 days at room temp.

Can I make these cinnamon rolls dairy-free?

Yes, this recipe can be made dairy-free by using your favorite non-dairy milk and vegan butter. I prefer Earth Balance buttery sticks for baking.

Can I make this vegan?

While this recipe can be made dairy-free, it cannot be made vegan because eggs are required to make the dough. I have not tested this recipe with Just Egg or an egg equivalent. I do have a vegan cinnamon roll recipe you might like.

Can I freeze cinnamon rolls?

Yes, cinnamon rolls freeze well. You can freeze the entire container or slice them and store them between pieces of wax paper in an airtight container. They will thaw quickly at room temp or can be popped in the microwave to reheat in just under a minute.

Can I make these overnight?

Yes, you can start the cinnamon rolls a day in advance. After rolling up the cinnamon rolls and placing them in a pan place them in the fridge for up to 24 hours. When ready to bake, remove from the fridge and let come to room temp (this takes about 30 minutes). Then let double in size for 30 minutes. Once doubled in size, bake according to recipe instructions.

Can I freeze it before baking it?

Yes, the dough should be frozen after the first rise when cinnamon rolls are placed in the baking dish. Let thaw in the fridge overnight when you are ready to bake them. 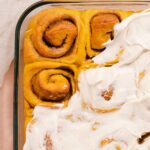