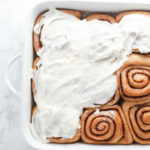 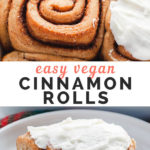 Ooey gooey cinnamon rolls are an important part of the Christmas season at my house. We make homemade cinnamon rolls every. single. year. I can't remember a year without them! There's just something so special about that sweet, enriched dough combined with a slathering of creamy almond flavored frosting. Cinnamon rolls are so mouthwatering good!

This vegan cinnamon roll recipe was first shared almost a year ago; in fact, it was one of the first recipes on the blog! Today I'm sharing it again with new photos and the same ole' tried and true recipe.

To the new baker, yeast breads may be intimidating. Enriched dough is a good place to start because it doesn't take nearly as much time to make as a sourdough or sandwich loaf, and it's easier to knead due to the high fat content. The high concentration of fat and sugar in enriched dough yields a soft and tender bread.

Cinnamon rolls are usually made with butter, or at least they are in my family. This recipe actually came about because I didn't have any butter (vegan or otherwise) on hand, but I wanted to make cinnamon rolls. It was snowing and cold outside, so I did what any cinnamon roll lover would do: improvise!

It turns out that canola oil is a great substitute for butter. Using canola oil instead of waiting for butter to soften cuts down on prep time and makes these vegan cinnamon rolls extra fuss-free.

Unlike most "classic" cinnamon rolls (like the ones I grew up on), these vegan cinnamon rolls are made with ⅓ wheat flour and ⅔ all purpose flour. The whole wheat flour gives the sweet, sweet rolls a little extra flavor without sacrificing the soft texture.

Step one: Dissolve the yeast. You'll start by dissolving active dry yeast in a mix of warm non-dairy milk and water and sugar. Cover with a damp towel and let sit for a 5-10 minutes, until bubbly and activated.

Step two: Add the oil, salt, and flax eggs. Stir everything together.

Step three: Stir in the flour, cinnamon and nutmeg. You can use a stand mixer, hand mixer, or a large wooden spoon for this part. Add 1 cup of flour at a time, stirring to combine. Once ~5 cups are added you should be able to start kneading it without it sticking to your hands too much.

Step four: Knead the dough until smooth and elastic. Turn the dough out onto a lightly floured surface or baking mat. Knead for 7-10 minutes, until soft and elastic. Sprinkle with more flour if the dough is too sticky, but be careful not to add too much. The humidity of your room will affect how much flour is needed.

Step five: Let the dough double in size. Place your dough in an oiled bowl, turning to coat both sides. Cover with a damp towel and let it rise in a warm area for 45 minutes, or until double in size.

Step six: Roll the dough out. Roll the dough into a long rectangle, ideally about 1 cm thick and 13x9 inches. You may need to sprinkle the dough with flour to prevent it from sticking to your rolling surface.

Step 7: Add the cinnamon sugar filling. Use a spatula to evenly spread the filling. Roll the dough into a tight log; it's okay if it's not 100% even.

Step 8: Use a sharp knife to cut into twelve 1" pieces. Layer the pieces into a greased 9x13 inch or similarly sized baking dish.

Step 9: Let rise for 15-20 minutes. Keep covered with a damp cloth while the dough is rising.

You'll need just a few ingredients for this creamy and spreadable frosting:

Simply mix the frosting ingredients together with a hand mixer or spoon. Is your frosting too thin? Sprinkle in some extra powdered sugar. Too thick? Add a small amount of non-dairy milk.

In under two hours (much of which is down time) you have ooey gooey, sweet and satisfying vegan cinnamon rolls fit for a family or a dozen friends.

"Warm" water should be ~105-108F, a little hotter than a hot bath. Too cold means the yeast won't be activated and too hot means the yeast will die.  You can usually get 10-12 cinnamon rolls from this dough, depending on how thickly you cut them. The above pictures are from a 10x10 inch pan, but a 9x13 inch or similarly sized will also work.