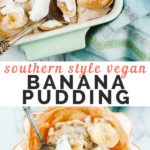 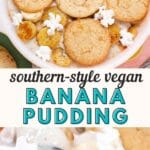 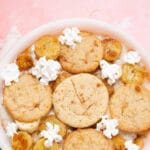 If this is your first time trying any kind of banana pudding, then you're in for a treat. Banana pudding isn't just what you might expect it to be. Yes, it's bananas and pudding.

But it's also softened vanilla wafers and whipped topping, all together in one delicious scoop! This vegan version of banana pudding is inspired by classic Southern banana pudding.

It's made without cool whip or instant pudding mix, but it still features all of the traditional components.

Banana pudding, best known as a southern dessert, has been around since the 19th century. The version of vanilla wafer banana pudding didn't come about until the 1920s when Nabisco started marketing their 'nilla wafers.

Previously, sponge cake or ladyfinger cookies were the main ingredients in banana pudding. With vanilla wafers, a new way to make banana pudding was found.

The most important takeaway about banana pudding is that everyone has their own "right" way to make it. Whipped topping or meringue? Chilled or baked? Vanilla wafers or ladyfingers? I can promise you that all versions are delicious and each has its own story.

Did you know that Georgia has a banana pudding festival? (I'll admit that I didn't until writing this blog post). Another interesting tidbit about banana pudding is that one of the earliest documented recipes with vanilla wafers was published in my hometown of Bloomington, Illinois. How's that for comfort food?

If you're also a lover of Southern food history, check out this article on how banana pudding became a southern icon.

These crispy cookies turn nice and soft after sitting with the vanilla pudding for a few hours. You can use my homemade vegan vanilla wafers recipe or find a dairy-free/egg-free version at the store.

Truthfully, I made my own vanilla wafers because I was having trouble finding a vegan version at the store. Natural food stores (such as Whole Foods or a co-op) are more likely to have them.

I have heard that inexpensive store-brand cookies will often be naturally vegan. When in doubt, check the nutrition label.

We are making homemade vegan vanilla pudding for this recipe. It's really simple to make on the stove using:

The star of the show! Use ripe bananas for a naturally sweeter pudding. We'll use 3-4 bananas in this recipe.

Ripe bananas have yellow skins. If they have brown speckles they are super-ripe. If the skins are on the green side they won't be very ripe or very sweet.

I use store-bought almond whipped cream for this recipe to cut down on prep time.

Most major grocery stores should carry dairy-free whipped cream. Do note that the banana pudding will look best if the whipped cream is added just before serving.

How to make the vanilla pudding

Turn off the heat and transfer to a heat-safe container. Let cool to room temp before transferring to the fridge to cool until completely chilled. This will take 3-4 hours.

Choose your dish: I used to make this in an 8x8 baking dish but I prefer making it in a one-quart baking dish (the one I'm using in the photos is antique but it's my go-to dish). A trifle dish is the most traditional way to serve banana pudding. You can also assemble individual servings in pint-sized glass jars.

Start by layering half of the pudding into your dish of choice. Top with enough banana slices to cover. Sprinkle with cinnamon.

Top with enough vanilla wafers to cover. Repeat the process until you have two layers. Depending on the size of the dish you're using you might be able to do 3 layers.

Top with brown sugar and dollops of whipped cream or cover the entire thing in whipped cream, it's up to you!

How long does this keep?

For best quality, enjoy within 2-3 days. It is still safe to eat after 4-5 days but the wafers will be really soft.

Can I make this in advance?

Yes! You can make the pudding and cookies 48 hours in advance. Assemble just before serving.

Can I use coconut milk instead of coconut cream?

Yes, you can but it won't be as creamy. The original version of this recipe used coconut milk but I changed it to coconut cream because the cream makes the pudding thicker.

How do I make the pudding thicken?

Keep simmering over medium-low and the pudding will eventually thicken as it evaporates off liquid. You may need to bump the heat up a notch if it's taking too long, but make sure to keep stirring occasionally.
If needed, you can add a cornstarch slurry of one tablespoon corn starch mixed with one tablespoon cold water.

Can I use different milk?

Yes, you can use any non-dairy milk to make banana pudding.

Can I add fresh banana flavor to flavor my pudding?

Yes, you can add mashed banana like the kind used in banana muffins. I recommend adding banana to the pudding just before serving because banana oxidizes and becomes gray over time, similar to how avocado browns when exposed to air.

If you liked this recipe, you might also enjoy my popular vegan pumpkin pudding or vegan chocolate pudding recipe. 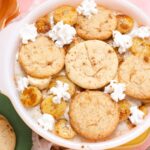 Note: This recipe was originally shared April 2019. It was updated May 6th with new photos, tips and an improved recipe method. The base recipe remains the same.