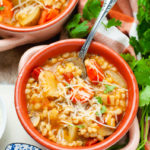 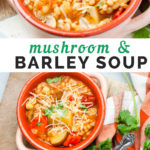 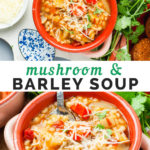 This vegetarian mushroom barley soup is the perfect cold-weather stew. Cozy up with hearty vegetables and warming flavors in this easy recipe!

Mushroom barley soup is just the recipe you need on those extra chilly winter days. It's hearty as can be, thanks to ingredients like mushrooms, potatoes and carrots.

I decided to make this mushroom and barley soup because I had a bag of dry barley that had been sitting on the shelf a little too long.

Mushroom and barley is a classic combination, and it's cold outside, so what's better to do with this whole-grain than make soup?

This barley soup is simple to make. After prepping and sauteing the vegetables, it's one of those "throw it in the pot and forget it" recipes. The more you simmer, the tastier this soup becomes!

Don't fear: It may look like a lot of ingredients, but I bet you already have most of them on hand.

New to barley? It's one of those ingredients that you may have heard of but never actually tried. Barley is a slightly chewy (in a good way) whole grain that contributes fiber, vitamins, and minerals as well as a nutty flavor.

What's the difference between barley and pearl barley?

Hull barley, also known simply as barley, is the complete version of barley. Pearl barley is hulled, meaning that the outermost layer is removed. This means that pearl barley is quicker to cook, but it has some of its nutrients taken away.

For this recipe, we will use pearl barley. If you accidentally grab regular barley, don't worry -- it will just take a little longer to cook.

Looking for more soup recipes? Here are a few of my favorites: