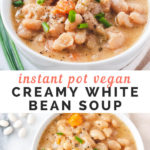 This creamy vegan white bean soup is a healthy and cozy soup made with dry great northern beans. No presoaking required! Just add a few pantry staples to your Instant Pot and get excited for a comforting stew.

Cozy up and grab a bowl of this creamy vegan white bean soup because it's officially soup season!

What makes it officially soup season, you ask?

Well, the average daily high is now less than 85 here in still-humid Georgia, which means there's a chill in the air in the morning and you can walk outside without immediately sweating. And so soup season rushes in!

I started my new full time job this week, and what a week it's been. Between training, driving and working, I was not in any shape to prep for lunch this week.

Thankfully I made this vegan white bean soup on Sunday and had enough leftovers to enjoy it for lunch through the week.

This soup is perfect for meal prep! You can even freeze it for later.

White beans: Dry great northern beans are a smaller white bean. Navy beans can also be used because they take a similar length of time to cook. Both beans soften well and make a delicious stew!

Soy milk: Unsweetened, unflavored soy milk is my go-to in soups but you can also use coconut milk beverage (I haven't tested with canned coconut milk) or almond milk.

Mirepoix: This mixture of carrots, onion and celery makes the base of the soup. Add in garlic for extra flavor.

Vegetable broth: I usually use a reduced sodium vegetable broth so that I have more control over saltiness. Regular broth also works.

Spices and herbs: I use dried rosemary and thyme but fresh can also be used. One tablespoon fresh chopped herbs is equivalent to one teaspoon dry herb. Cayenne pepper is optional but I love it for a little kick of spice!

Nutritional yeast: I like to add a tablespoon of nutritional yeast to creamy vegan soups because it adds a cheesey flavor and contributes to the creamy factor. This can be omitted if you don't have it on hand.

You can make this warming Instant Pot soup in just about an hour, most of which is hands-free.

As an Amazon Associate and member of other affiliate programs, I earn from qualifying purchases.