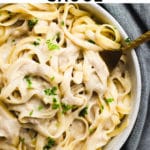 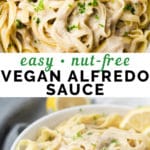 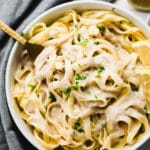 This vegan garlic alfredo sauce requires just six ingredients and is nut-free, easy to make and so creamy!

Unlike most vegan alfredo sauces that use cashews which require soaking, this one can be made in just over 15 minutes. No blender or food processor required, just simple ingredients and a skillet.

This was originally the second recipe post on my blog. It has since been revamped with prettier pictures and more helpful instructions, but the recipe remains the same.

For the alfredo sauce you need just six ingredients (plus salt and pepper!):

Oh, yes! We aren’t taking any shortcuts to make this a “healthy” alfredo sauce, but some of the ingredients like soy milk are naturally lower in saturated fats than traditional milk.

Flour and fat combine into a deliciously creamy, thick sauce. I recommend using vegan butter in this recipe because it provides similar quality fat and flavor as traditional alfredo. However, olive oil also works and will still provide a creamy sauce.

How to Make Vegan Alfredo Sauce

Step one: Start by melting vegan butter in a skillet over medium heat (1A). Once hot, add a liberal amount of minced garlic. Saute until golden (1B).

Step two: Once the garlic is golden, slowly sprinkle in flour one tablespoon at a time. Whisk continuously to prevent clumping. (I recommend using a silicone whisk to prevent scratching your pan.) Continue stirring the flour in the pan until browned, about 1 minute.

Tip: For a foolproof method to prevent lumps, use a sifter to sift in the flour.

Step three: Slowly pour in the soy milk, whisking continuously. I pour the milk in  ½ cup at a time to make sure it is evenly mixed and prevent lumps. (Image 3 shows sauce after ~1/2 cup is added).

Step four: Once all of the soy milk is added, sprinkle in salt, pepper, and nutritional yeast. While whisking, bring the heat to medium-high.

Step five: Once the sauce is bubbling, reduce the heat to medium-low. Simmer until sauce reaches desired consistency, whisking occasionally to prevent a skin from forming. This usually takes about 10 minutes.

Step six: Once thickened, squeeze in lemon juice, taste for salt and pepper & enjoy tossed with pasta of your choice.

Note: The longer you simmer the sauce the thicker it will become. This is because you are evaporating liquid from the sauce. If the sauce isn’t as thick as you’d like and you have been simmering for a while, you can add a slurry by mixing together 1 tablespoon cold water with 1 tablespoon flour. Simmer until thickened.

What kind of non-dairy milk should I use?

What kind of vegan butter should I use?

I use Earth Balance buttery spread or buttery sticks, but any vegan butter should work. Miyoko’s is also a good option.

I have not tried this recipe with coconut oil so I cannot say how that would work, but if you give it a try let me know in the comments!

Can I make this alfredo gluten-free?

This alfredo sauce is great as is, but you can amp it up even more with these ideas:

Looking for similar staple vegan recipes? Here are a few of my favorites:

However you choose to make your vegan alfredo sauce, I hope that you love it!

Tip for a smooth sauce: For a foolproof method to prevent lumps, use a sifter to sift in the flour.

Thickening the sauce: The longer you simmer the sauce the thicker it will become. If the sauce isn’t as thick as you’d like and you have been simmering for a while, make a slurry by mixing together 1 tablespoon cold water with 1 tablespoon flour. Add to the sauce and simmer until thickened.

Vegan butter vs olive oil: I use Earth Balance buttery spread or Miyoko's. Olive oil will also work but the sauce will be slightly less creamy. I have not tried this recipe with coconut oil.