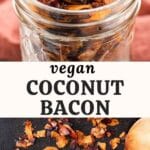 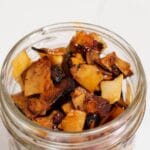 All you need is 5 ingredients and under 10 minutes to make this sweet and salty vegan coconut bacon on the stovetop. It's the perfect addition to vegan mac and cheese, roasted veggies, or popcorn!

These coconut bacon bits are:

Bacon is one of those things that everyone seems to love. And it's only natural, as our bodies love sweet, salty, and fatty foods.

These coconut crumbles are a healthier vegan alternative to one of the most classic comfort foods. They are amazing on top of vegan mac and cheese or in vegan ranch pasta salad.

Table of Contents show
1 Ingredients
2 What kind of coconut should I use?
3 How to make
4 Expert tips and FAQ
5 Looking for more vegan comfort food?
6 Vegan Coconut Bacon Bits

What kind of coconut should I use?

The most important part is to choose unsweetened coconut for vegan coconut bacon. I recommend using coconut chips, which are thicker and less likely to burn than coconut shreds or coconut flakes.

That being said, coconut chips are harder to find and you may have to purchase them online. They are most likely to be in the baking aisle or the fruit and nut aisle at grocery stores.

For smaller coconut bacon bits, like the kind you would find in a shaker, use unsweetened shredded coconut flakes.

Different size flakes will require different cooking times. While cooking, keep an eye on the color of the flakes to prevent burning. They should turn golden brown, not black.

In a medium bowl, whisk together the reduced-sodium soy sauce, maple syrup, olive oil, and smoked paprika. Add the coconut to the "sauce". Stir to evenly coat the coconut.

Heat a pan over medium heat. You do not need to oil the pan because there is oil in the marinade. Add the flakes to the hot pan.

Cook until golden around the edges, stirring often to prevent burning. Make sure to keep an eye on the flakes, as they can burn quickly due to the high sugar and fat content.

Remove the coconut flakes from the stove when golden around the edges. The coconut will not be 100% crisp when done cooking. Let them rest for 5 minutes to crisp up.

Can I use this same method to make larger pieces of vegan bacon?

You can use the same ingredients to make vegan bacon using rice paper, but because it's a different ingredient the cooking time will be different. I do have a recipe for vegan tempeh bacon that uses similar flavors.

If you're looking for more vegan-ized meats, you'll have to check out my vegan sausage patties, chorizo-style tofu, and tempeh taco meat. 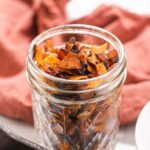 Author's note: This recipe was originally shared March 2019. It was updated March 2022 with new photos and more tips. The recipe is the same.